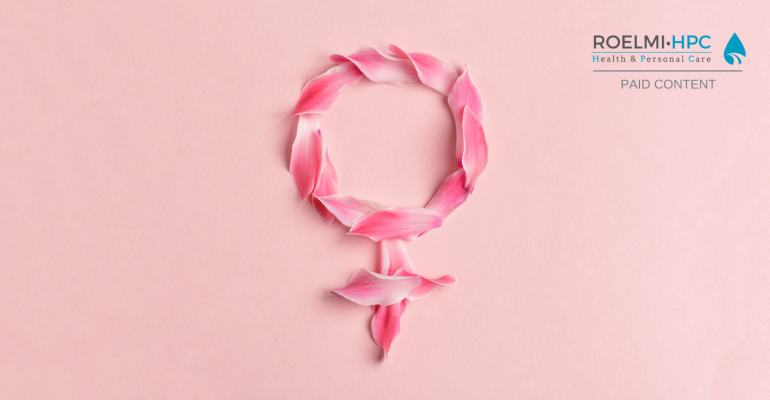 Women embrace changes, even swings, during all stages of life. Hormonal changes affect all parts of the body; they can deeply modify the vaginal environment, and in some cases lead to infections, linked to poor vaginal biodiversity. Most women will experience some kind of vaginal distress during their lifetime, which affects well-being and quality of life. Since female consumers are more aware of the crucial role of a holistic approach to both prevention and treatment interventions through nutraceutical solutions, a renewed and attentive interest is rapidly spreading. Hyaluronans and probiotics are powerful actives for both oral and local applications, to rebalance vaginal microbiota and restore mucosal wellbeing.

In the early days of the nutraceutical industry, product developers seemed to target both genders indistinctly, with products aimed to support general wellbeing. Later, thanks to deeper research driven by the demand for specific solutions, product offerings became wider and also started being split in specific targeted applications. Now, consumer demand for personalised solutions crowns this market, showcasing the potential of nutraceuticals delivering even more fitted solutions to both traditional and innovative requests.

There are almost 4 billion women on earth, and the fluctuating nature of their biological needs drives the multitude needs that nutraceuticals can address: from beauty-from-within and weight management, to essential intimate health, up to specific nutritional requirements in pregnancy and menopause, as well as the care of children.

The dietary supplements market is currently valued at US$70 billion, and the women’s health category accounts for 4%—a result of an over 8% increase over the past five-year period, with Europe and APAC indicating highest market shares. New product launches highlight how women's health carries weight within the sector—especially those with maternal and menopause claims—with Europe at the top. 'Ingestible beauty' solutions are spreading, appealing to a younger audience with a preventive perspective.

The population is also ageing, with the ratio between younger and over 55 women slowly becoming smaller. Europe is expected to reach its trend inversion in 2050, being a faster ageing area than others; actually, product launches for pre- to post-menopausal conditions, and bone health, are already increasing, thus confirming the trend of women between the ages of 40 and 60 to be the most concerned about health.

Throughout the years, most women will face vaginal discomfort more than once. Indeed, the biological equilibrium of this area of the body is both important and fragile, the result of ever-changing physiological aspects. Softness and hydration characterise intimate mucosae; these play also the role of a firm barrier, and vaginal microbiota is the key element for its defence.

Hormonal changes are pivotal for intimate balance; oestrogen fluctuations occurring through women’s lives could impair vaginal equilibrium, resulting in various disorders. The epithelium becomes thinner, and tissue elasticity and moisturisation decreases, leading to feelings of dryness, itching and burning. These conditions, especially linked to menopause, and associated with atrophic vaginitis, make women more prone to inflammation. Affecting vaginal microbiota composition, hormonal variations compromise barrier function, too, increasing the risk of infections, or recurrences. A dry and firm epithelium is more likely to damage, with micro-lesions that offer open-doors to pathogens.

To support these conditions and help recovery, there are different approaches to re-balance intimate equilibrium. Hormonal therapy, moisturisers, and anaesthetic are elective treatments. Leaving out oestrogens, different actives aim to keep intimate tissues hydrated, soothe inflammation and help epithelium recovery. Among them, hyaluronans are a powerful support for vaginal relief. When taken orally, they increase endogenous synthesis of hyaluronans, supporting the efficacy of those biological processes that could suffer of aging-related lack of this fundamental molecules. When locally applied, hyaluronans exert bio-signalling and bio-mechanical activities, promoting hydration and wound-healing. Further, their film forming properties allow tissue protection and regeneration. ExceptionHYAL® Relief is Roelmi HPC's solution to support vaginal discomfort. It is 2.0 Full Spectrum, based on HATech 2.0® technology, delivering a fingerprint of hyaluronans molecular weights, specifically designed to match mucosal needs; this supports hydration, healing of micro-lesions, and has a soothing effect, thus re-balancing vaginal conditions. ExceptionHYAL® contributes to barrier effect strengthening, preventing from micro-lesions due to dryness, and improving tissues integrity. Combining hyaluronans with probiotics allows the treatment of certain conditions and prevents recurrences, acting not only on symptoms, but also on causes.

Women suffer from vaginal distress due to hormone modification that can break the vaginal ecosystem. Vaginal microbiota is populated by different microorganisms, especially Lactobacilli, able to avoid pathogens colonisation and rebalance the ecosystem. Among vaginitis, Bacterial vaginosis (BV) is the most widespread, causing physical and psychological discomforts, whose prevalence among reproductive-aged women can range from 20% to 60%. BV is characterised by the presence of mainly anaerobic microorganisms (including G. vaginalis and Prevotella species), vaginal discharge and a fishy odour. Half of affected women don’t present symptoms, thus increasing the risk of sexual transmitted infections, infertility and preterm birth.

In this situation, Lactobacilli can support women by interacting with host physiology and influencing pathogens. Studies are focusing on probiotics' mechanisms of action in supporting and preventing these conditions. Literature suggests that, through oral administration, Lactobacilli and Bifidobacteria can colonise the intestine, move to the vagina and exert their beneficial effect; this offers the chance to formulate probiotics to treat uro-genital infections and reduce relapses. Indeed, Lactobacilli may form protective biofilms and produce antimicrobial compounds. Clinical observations have prompted a turn to probiotics as a second-line treatment, as part of a multi-drug approach.

This is ROELMI HPC's approach: after in-vitro selection of the most performing strains, L. plantarum PBS067, L. rhamnosus LRH020 and B. lactis BL050, composing SynBalance® Femme, were clinically tested. In the first clinical trial, probiotics' ability to colonize and persist in vagina through oral intake has been investigated. In a RDBPC clinical trial, 40 healthy women were asked to take SynBalance® Femme for 14 days, 3B CFU/day. Results during the treatment, and even seven days after last product intake, demonstrated that strains can reach the vagina (p<0,05) migrating from the gastrointestinal tract, in line with the GI colonisation observed in another study. Once vaginal probiotics colonisation was confirmed, their ability in reducing BV relapses was investigated. For this perspective clinical trial, 75 women, all treated with antibiotic for five days, were split in two groups: 50 took SynBalance® Femme (3B CFU/day) for 14 days after antibiotic, and for the following four months, seven days/month, while the last 25 did not take anything after antibiotic treatment (negative control). In the active group, the recurrence rate dropped dramatically to 16%, against 40% in control (p<0,01). Microbiota analysis after follow-up period highlighted a recovered Lactobacilli portion in SynBalance® Femme group, against a perturbed microbiota characterised by Lactobacilli depletion in the control. The recurrence rate outcome recorded in the negative control group was in line with epidemiological data (40-60%). Moreover, the active group also perceived an improvement in BV’s clinical markers and symptoms.

Throughout life, intimate equilibrium can challenge women, and hyaluronans and probiotics are increasingly delivered through nutraceutical applications, backed by promising clinical evidence. An adequate education is important to give women all means to effectively promote intimate balance, preventing recurrences.