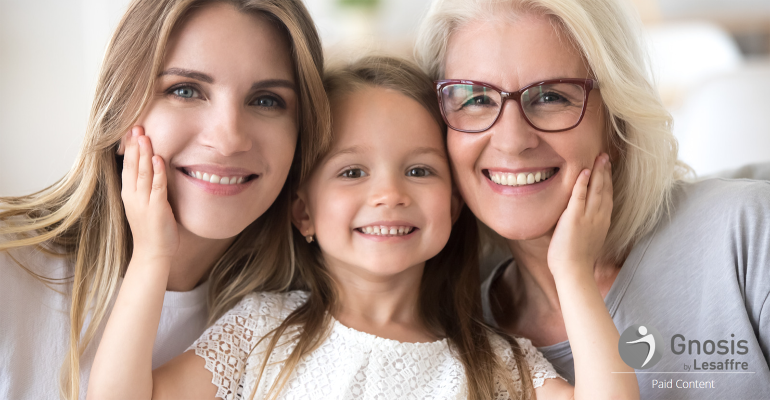 Gnosis by Lesaffre stands out in the folate arena with Quatrefolic®, the glucosamine salt of 5-MTHF, able to match women’s unique needs. From childbearing to postmenopausal age, new folate science focuses on the active form providing new benefits.

Sex-based differences and their health implications are now being considered, recognizing how women are programmed differently from conception. Important physiologic, neurologic, and hormonal distinctions throughout the lifecycle impact women's nutritional needs, and although having a longer life expectancy than men, they face different risks of chronic diseases.[1]

Folate (vitamin B9) has a key role in women’s health during all stages of life. Getting enough folate through a healthy and balanced diet is sometimes not enough, especially during specific seasons of life; the best way to avoid folate deficiency is by taking a supplement. Folic acid (FA), the synthetic form of folate, has dominated the market, but new scientific findings support that not everyone can benefit from its supplementation in the same way.

Gnosis by Lesaffre stands out in the folate arena with Quatrefolic®, the glucosamine salt of the biologically active form 5-methyltetrahydrofolate (5-MTHF). Quatrefolic® matches women's unique needs, overcoming FA metabolization limitations that can attribute to it being less efficacious – low availability of 5-MTHF – and the potential need to use a supraphysiological dose of FA.[2]

The Folate family includes food folate, synthetic-derived FA, and 5-MTHF. In the body, both food folate and FA must go through a conversion controlled by specific enzymes, to provide the bioactive form 5-MTHF.

Approximately 40% of the global population, however, have a specific genetic trait (known as MTHFR polymorphism), associated with defective availability of 5-MTHF, and may not benefit the FA supplementation at all.

Further, FA poses potential health risks in certain conditions, such as its accumulation in the form of Unmetabolized FA (UMFA), which has no biological function and whose effects are not yet totally known. These aspects can be overcome with 5-MTHF supplementation.[3-6]

Taking Quatrefolic® can benefit every woman: Quatrefolic® – 5-MTHF glucosamine salt – is already active and doesn’t require metabolization, effectively bypassing that genetic variation, and doesn't lead to accumulation of UMFA. Choosing the right supplement with Quatrefolic® can be a great advantage, guaranteeing to get the bioactive form of 5-MTHF needed without enzymatic bioconversion.

In pregnant women, the folate requirement is 5-10-fold higher compared to those who are not pregnant. 5-MTHF constitutes 95-98% of folate in serum/red blood cells (RBCs). Inadequate maternal folate status in women increases the risk of neural tube defects (NTDs), and of low infant birth weight, preterm delivery, and fetal growth retardation.[7]

Quatrefolic® has been demonstrated effective in women’s fertility, also with those expressing MTHFR polymorphism. A 2017 case series study evaluated its effect in 33 couples with recurrent miscarriages, lasting for at least 4 years. Thirteen spontaneous pregnancies were observed at the end of the treatment, and another 13 pregnancies were obtained after assisted reproductive technology (ART) – a pregnancy rate of 86.7%.[9]

Homocysteine (Hcy) levels are a modifiable risk factor for many conditions in postmenopausal women. Quatrefolic® supplementation can help postmenopausal women to normalize Hcy, which contributes to cardiovascular health, mood and cognition, and bone health.

Hcy increases after postmenopausal age, increasing the risk of cardiovascular disease. In a 2015 study, Quatrefolic® was more effective in reducing Hcy serum level than FA, normalizing Hcy in 55.8% of cases.[10] Recently, an association between Hcy and low bone mineral density (BMD) has been positively investigated.[11]

Hcy is also a recognized risk factor for brain decline, including mood impairment and depression.[12]

While FA may have been the standard of care, emerging evidence for folate highlights its shortcomings for a large percentage of the population. The active form of folate, 5-MTHF, presents a clinically validated alternative that supports a wider range of women through all stages of life.

Brought to you by: