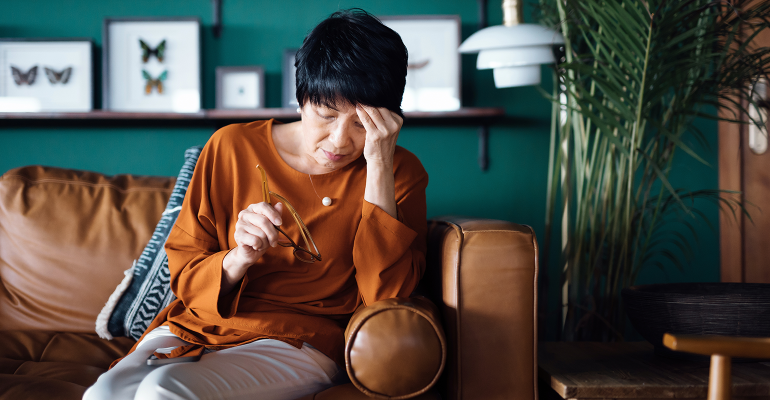 Plant-based hormone replacement therapy (HRT) uses phytohormone-containing botanicals such as soy, red clover, and sage as a natural alternative to conventional HRT to alleviate menopause symptoms. But how safe is it?

There are scores of symptoms associated with the pre-, peri-, post-menopause and menopause, ranging from low mood, brain fog, weight gain, and heart palpitations to aching muscles, recurring urinary tract infections, and insomnia. These symptoms are caused by lower levels of hormones in the body as women approach and go through menopause.

Conventional hormone replacement therapy (HRT) is effective at alleviating menopause symptoms – 54% of UK women using HRT say it has “given them their life back”, according to a UK survey by gender equality and women’s rights charity Fawcett – but just 14% of menopausal women are currently taking it.

Reasons for such low uptake include a lack of awareness – 24% said that they don’t know enough about HRT, according to the same survey – but also fears of side effects: an additional 24% said they were worried about the increased risk of cancer or other illnesses.

This has fuelled a rise in so-called plant-based HRT, also known as compounded bioidentical hormone replacement therapy (cBHRT). Soy, red clover, sage, and black cohosh are examples of plant-derived phytohormones, and proponents say these bio-identical alternatives are safer because they are derived from nature.

However, the UK’s National Health Service (NHS) and British Menopause Society do not recommend plant-based phytohormones because there is no evidence for their efficacy or safety and because many claims for the benefits of cBHRT have been largely extrapolated from studies of conventional, regulated HRT, they say. In the US, cBHRT is not regulated by the Food and Drug Administration (FDA) and products are not tested for quality, purity, and potency.

However, there are gentler, more holistic ways that such phytohormones, vitamins, and minerals can be used.

Bethan Thomas is co-founder and CEO of HotTea Mama, a company that makes a range of teas for women going through premenopause, perimenopause, menopause and postmenopause. Its Take A Pause blend, for instance, contains raspberry leaf for uterine health; gingko biloba to help mood and ease breast tenderness; ginseng that has been shown to ease hot flushes; and the phytohormone, sage.

“There’s a regulatory and ethical requirement for anyone like me who has a product that can be part of a holistic, natural, approach to managing your symptoms but is in no way medical, to make that very clear. It’s something that I’m aware of and we work hard to ensure that it’s something we do,” said Thomas, speaking on a recent Food Matters Live panel discussion, How to address the unmet needs of menopausal women.

Thomas added: “Non-phytohormone herbs are something I am much more comfortable communicating to people about because they are not claiming to solve the issue or replace HRT but [when taken] alongside HRT, they can help manage symptoms.”

Examples of such nutrients include magnesium for stress and anxiety and gingko biloba, which is linked to improved mental function, said Thomas, although she noted that most of the research has not been conducted with menopausal women.

The doctor’s view: ‘As long as it isn’t doing harm, it’s the woman’s choice’

Heather Currie, gynaecologist and owner of independent, educational website Menopause Matters, noted that while many supplements lack clinical evidence, they do help some women who prefer not to undergo hormone replacement therapy.

“As a healthcare professional, I always have to advise and recommend evidence-based products,” she said. “You are never going to be able to have trials of thousands of women – blinded, randomised, placebo-controlled – with food products; whereas with HRT, we have masses of scientific evidence and randomised trials that show the benefits of HRT. The point is, there are still lots of women who would prefer not to take HRT. It has many benefits, but it is not perfect, it does also have risks.

“While you’ll never have that evidence [for alternative therapies such as herbal supplements], I am in no doubt that some women find some things helpful even though there isn’t evidence and even if it’s a placebo response. As long as it isn’t doing harm, then for me, it’s the woman’s choice. Every woman is different.”