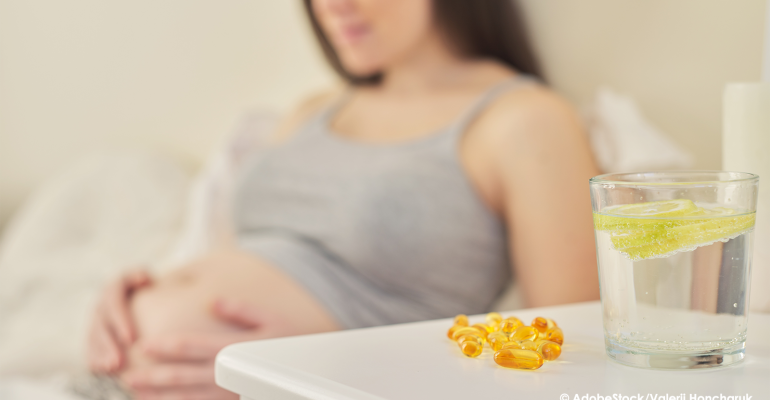 Offspring born to pregnant women who consumed higher levels of vitamin D had a reduced risk of atopic eczema.

Supplementing pregnant women with vitamin D appears to reduce the risk of atopic eczema in their offspring, according to a new intervention trial. Observational studies had previously suggested a connection between prenatal vitamin D levels and eczema incidence in new-borns; however, researchers from the University of Southampton sought to determine whether supplementation could be connected to eczema risk.

The team used data from the UK Maternal Vitamin D Osteoporosis Study (MAVIDOS)—a double-blind, placebo-controlled, randomised trial—in which pregnant women (n=703) received 1,000 IU/d of cholecalciferol or matched placebo from 14 weeks’ gestation through delivery. Prevalence of atopic eczema in offspring was assessed at 12, 24, and 48 months, using the UK Working Party Criteria for the Definition of Atopic Dermatitis.

Mother and infant characteristics were similar between the two groups, apart from longer breastfeeding duration in the intervention group. Adjusting for breastfeeding duration, offspring of women who received the cholecalciferol supplementation had a lower odds ratio of atopic eczema at 12 months; the effect was not statistically significant at ages 24 and 48 months.

“Our results showed that babies of mothers who received supplements had a lower chance of having atopic eczema at 12 months, which supports recommendations for vitamin D supplements to be routine during pregnancy,” said Dr Sarah El-Heis, lead author of the paper, in a statement. “We found no effect at 24 and 48 months suggesting that other postnatal influences might become more important beyond infancy or that the babies themselves might also need to be supplemented during the postnatal period for a sustained effect.”

“We know that vitamin D can affect the immune system and the proteins that make up our skin. We were interested to know if Vitamin D supplements taken by pregnant women would have an impact on their child's risk of atopic eczema. … Our findings showed a positive effect, which was more evident in infants that breastfed. This may reflect supplementation during pregnancy increasing the amount of Vitamin D in breast milk.”