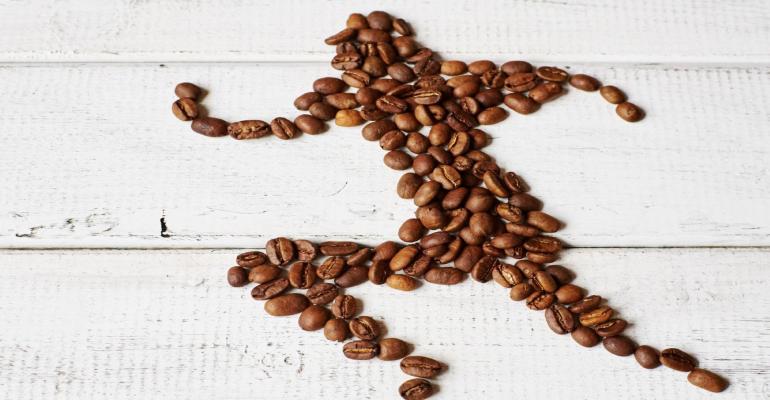 Consuming a moderate dose of caffeine before exercise can bolster aerobic and anaerobic performance, according to a position paper from The International Society of Sports Nutrition.

Supplementation with caffeine can improve myriad aspects of sports performance, from muscle strength to aerobic endurance, in trained and untrained individuals, according to a critical research review led by Nanci S. Guest, University of Toronto, for The International Society of Sports Nutrition (ISSN) (DOI: 10.1186/s12970-020-00383-4). Published on 2 January—just in time for those seeking to get back on the exercise plan—the paper noted there has been ‘keen interest’ in understanding the impact of caffeine on different aspects of exercise performance.

When taken in moderate doses, defined as 3 to 6 mg/kg, caffeine appears to be an effective ergogenic aid during endurance-type exercise and sport, the paper concludes. Similar dosage levels appear to have positive effects around muscular endurance, strength and power, although with some variability. For example, data on repeated sprint and power performance is mixed, but there is evidence supporting caffeine to enhance power and velocity in resistance exercise.

In addition, the research shows benefits to cognitive performance, exerting peripheral and central neural effects. Its positive effects on concentration and alertness make it an effective ergogenic aid for individuals under stress or sleep deprivation. However, the authors note caffeine can impact sleep quality, possibly due to genetic variation, suggesting individuals assess the time of day and impact of caffeine ingestion on mood and sleep.

What might this mean to formulators looking to offer efficacious sports products with caffeine? Co-author Douglas S. Kalman, Ph.D., vice president of scientific affairs with Nutrasource, comments that it comes down to the performance goal. “What impacts on the end-user or for the user are they hoping to achieve, from an exercise performance standpoint, from a mood states perspective and from overall safety, too, of course,” he said. “Formulators should consider knowing what dose caffeine to use in a product based upon the evidence-based literature and use of a reference being for scaling the dose.”

Given the potential range of product formats, the review also delves into delivery forms and timing, noting the common consumption window is 60 minutes pre-exercise for supplements. However, alternative formats such as chewing gum, gels and chews may have a shorter onset time, with more benefits seen in aerobic exercise. Supplements and energy drinks, meanwhile, appear to act on anaerobic and aerobic performance parameters.

Whatever the product format and target audience, Kalman encourages companies to ensure they’re being transparent with consumers, and representing the state of the science without resorting to ‘puffery’ to drive marketing. “Companies should not overstate what caffeine can do for an individual and be responsible enough to understand that natural stimulants are not for everyone and can have side effects,” he said. ”In many of the pre-exercise/pre-workout products, in energy drinks and in other foods and beverages that people consume, caffeine is a typical component and, as such, companies have a responsibility to remind consumers to be aware of caffeine use from all sources. Companies also have a duty to be true to the science as communicating to their end-user regarding how timing of caffeine intake can make a difference for mental or physical performance. This gives their consumer the best chance to experience the positive impacts consistent with the literature.”