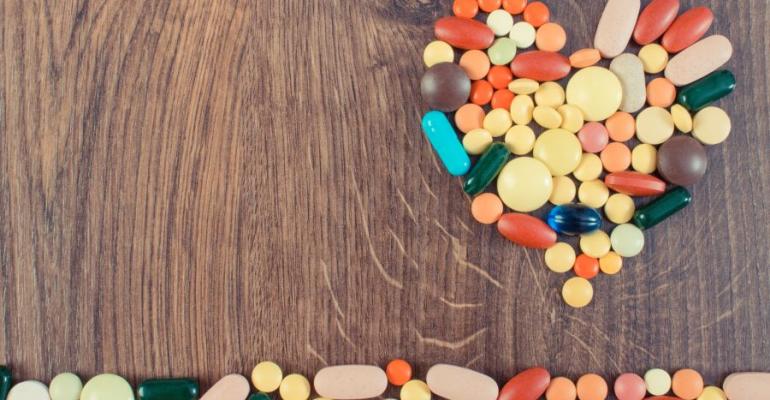 ‘Coating’ means any kind of covering of a substrate; the term can refer to the process of coating, as well as to the coating material.

The film coating of tablets or capsules is an important step in the process of manufacturing a dietary supplement, which originated in the pharmaceutical manufacturing process. The reasons for coating can be quite diverse. First, there may be technical reasons to make the product easier to swallow, for example, or to improve how it feels in the mouth, or to conceal taste and aroma.

Another reason for film coating is to make the product more stable especially if the product contains active ingredients, which are sensitive to humidity, oxygen, or light. This is to prevent chemical reactions of the active ingredients, which could affect the properties of these ingredients. Delayed release by enteric-coated film coating is another possibility. Coloured coating helps a user to distinguish various products or dosages, but quite often it is also applied for appearance. This can promote a positive feeling and recognition value for a medication or dietary supplement by brand recognition. Film coated tablets are also more resistant to mechanical influences than the uncoated tablets.(1) The end consumer recognises the product as a premium product, associating it with consistent high quality. Another advantage is a certain protection against product counterfeiting by the additional film coating,(2) since complex coating technology requires extensive technical know-how. For soft gel capsules, an enteric coating (description see below) can eliminate the ‘burping’ problem, which can be a side effect for people with sensitive stomach. These are all ways to promote long-term loyalty in the end consumer.

The dragee is most likely the oldest coated form of medication. Its name is derived from the French word ‘dragée’ (meaning small sweets). Coating with several layers of sugar was often used to conceal the quite bitter taste of some pharmaceutical ingredients. Classical sugar coating uses five production steps—sealing, sub-coating, color coating, smoothing, and polishing. There is also a shorter and slightly modified version, which uses three steps—spraying, mixing, drying. Sugar coating requires long processing times of up to two days, since many individual layers of sugar must be applied in order to provide a stable overall cover so it is quite time consuming as well as material consuming, and therefore sugar coating is being increasingly replaced by film coating with a polymeric structure (3, 4).

In film coating, the coats are fairly thin in contrast to the thick sugar coating, so the increased weight of the actual tablet core is negligible (for comparison: coat thickness of a sugar-coated tablet is 0.2 to 0.5 mm, and a film coated tablet is 10 to 100 μm) (5). A further advantage is the short processing time—typically 75 to 120 minutes.

The History of Coating and Film Formers

The state-of-the-art coating process—which uses semi-synthetic or fully-synthetic polymers as a film former on pharmaceutical products— originated in the 1950s, although the first medication to be coated with plant seed slime dates back more than 1000 years and was used by the physician Rhazes in Bagdad (850-923 AD) (7). The use of polymers mainly with alcoholic solutions— which was still common practice decades ago— has been largely repressed due to the risks involved with their volatile nature. Today, polymers are often processed in aqueous dispersion, aqueous slurry, or aqueous solution. Examples for water soluble film formers, which are approved for the food industry and thus also for dietary supplements, are hydroxypropyl methyl cellulose (HPMC), aka hypromellose, methyl celluloADse (MC), and polyvinyl alcohol (PVA) among others, however, natural agents, such as shellac, are also frequently used for dietary supplements (8). Some polymers have the advantage of remaining stable even in a low pH-environment (such as gastric acid, which has a pH value between 2 and 4) and only dissolve in a pH neutral environment. Additives such as talcum help to prevent tearing of the film during film coating while wetting agents like polyethylene glycol (PEG) are added to improve the elasticity of the film (2).

The definition of suitable processes and coating materials requires extensive practical know-how and a sure instinct. Not for nothing do we call it the "art of sugar-coating" (3), which likewise applies to the complex coating process. Technical laboratories allow for the development of suitable processes and optimum process conditions, and the modification of known film formers increase the selection range continuously. So the future will bring a constantly growing variety of film coating materials, which will also be available for dietary supplements.