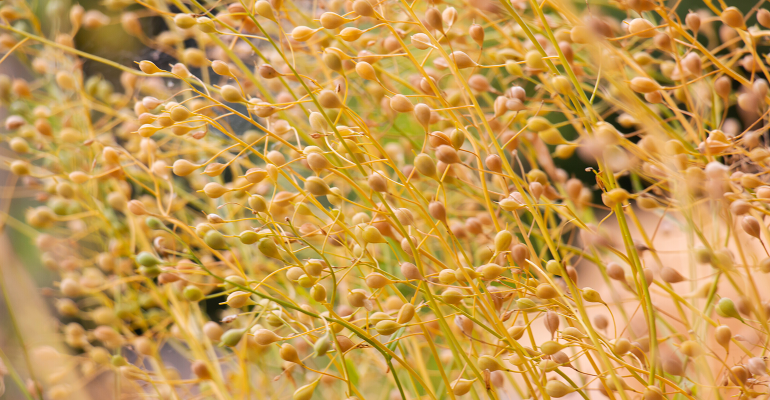 From transgenic plants to cell cultivation and from precision fermentation to high-omega algae, industry disruptors are developing novel methods to produce omega-3 that are fish- and krill-free.

EPA (eicosapentaenoic acid) and DHA (docosahexaenoic acid) are long-chain omega-3 polyunsaturated fatty acids that bring numerous proven health benefits for brain function, vision, blood pressure, and heart health, and demand for omega-3 supplements is increasing, with an expected compound annual growth rate (CAGR) of over 8% from 2020 to 2028, according to Grand View Research.

However, levels of over-fishing mean that the oceans’ resources are already stretched. What’s more, 70% of fish oil that is produced is currently used by the aquaculture industry to improve the nutritional quality of fish feed and is therefore not available to meet rising consumer demand for omega-3 oils.

In addition to addressing the issue of overfishing, there may another reason to develop alternative sources of omega-3. Rising sea temperatures linked to climate change mean that natural levels of these fatty acids in the oceans may be falling.

The Global Organization for EPA and DHA omega-3 (GOED), which represents the interests of the omega-3 industry, supports the development of novel methods to produce fish- and krill-free omega-3.

“It’s a fact that the total EPA and DHA currently supplied by the oceans cannot meet global demand for even the most conservative recommended daily intake,” said Chris Gearheart, director of growth and engagement at GOED.

Non-profit organisation the Good Food Institute (GFI), which champions an animal-free food system, echoes this. “There is a need for a more robust supply chain for animal-free omega-3s as ingredients for all three alternative protein production platforms: cultivated, fermentation-derived, and plant-based,” it says.

So, what are the next-generation alternatives? How are they being produced, how do they compare nutritionally, and how much potential do they really have to alleviate pressures on wild fish and krill stocks? 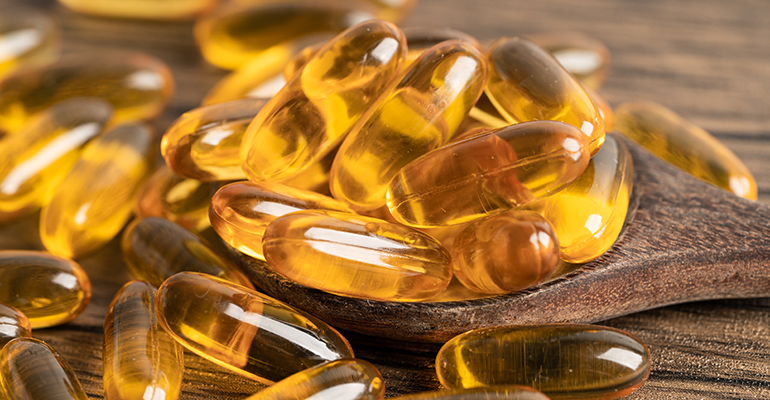 UK-based non-profit research centre Rothamsted Research has produced plant-based omega-3 fatty acids by genetically modifying the common commodity crop Camelina sativa to synthesise EPA and DHA. According to the lead scientist behind the research, Professor Johnathan Napier, transgenic plants are a sustainable and environmentally friendly source of omega-3 fish oils for use in novel foods.

Napier and his team of researchers say they have scientifically demonstrated there was no difference in the bioavailability of their EPA- and DHA-rich plant oil in human studies compared with conventionally produced fish oil.

“The only difference [was] that our plant oil is significantly more sustainable!” he said.

Rothamsted Research is collaborating with a US company, Yield10 Bioscience, to commercialise the novel crop. Yield10 Bioscience says its engineered camelina lines produce approximately 20% of EPA and DHA fatty acids, which is similar to the composition of northern hemisphere fish oil.

It has conducted several field tests in the UK, US, and Canada for four years, collecting the oil samples and conducting further studies on both salmon and human consumption. “Equivalence to natural fish oil has been demonstrated,” it says.

While admitting that he was biased, Napier said there were clear benefits of using transgenic crops to produce omega-3 over other approaches.

“I am not too familiar with the [cell-cultured] approach, but I can’t imagine that any system that relies on cell culture could compete economically with a plant-based approach. I mean, the cost of growing a plant in a field, versus culturing cells in a sterile environment and using expensive reagents to allow the cells to grow, means that agriculture always comes out on top. This is also true if you compare with systems that are making EPA and DHA via algal fermentation,” he said.

“In addition, whilst it is simple to scale up with a plant-based system – you just plant more fields – if you are trying to scale up with a cell-culture system or fermentation, you need significant infrastructure to support this, plus energy costs, which are obviously increasing dramatically,” Napier added.

Precision fermentation uses microorganisms, such as yeast or bacteria, as a production host to synthesise a specific molecule of interest, and could also be a promising way to produce animal-free omega-3 polyunsaturated fatty acids (PUFA).

The GFI notes that oleaginous yeast, such as Yarrowia lipolytica, may be the most suitable candidate for synthesising fats because it can accumulate large amounts of intracellular lipids.

Scientists have already produced EPA using this method. In 2013, the researchers described how they metabolically engineered the yeast lipid to comprise 56.6% EPA and fewer than 5% saturated fatty acids by weight. “[These] are the highest and the lowest percentages, respectively, among known EPA sources,” they wrote.

However, numerous variations on the idea of producing long-chain omega-3 PUFAs via fermentation may be imagined, according to the GFI.

“Different hosts will pose different advantages and disadvantages. They can be optimised for greater efficiency, and the variety of metabolic pathways through which these compounds can be produced allows a great deal of room for optimisation, both in the interest of cost and scale and in the interest of optimising the fatty acid profile of the final product,” it says.

Cell cultivation, also known as cell culturing, is another method being used to produce animal-derived ingredients without the use of animals. While the technique is mostly being used to develop meat products, it can also be leveraged for omega-3 fatty acids.

Spanish startup Cubiq Foods is developing cell-cultured DHA and EPA in addition to a range of cultivated fats for food applications. It has already partially submitted a novel food dossier to the European Food Safety Authority (EFSA) and aims to have a cultivated omega-3 product on the market by 2025.

It uses duck cells in its cell-culturing platform. According to the company’s CEO, Andrés Montefeltro, this is ideal for producing omega-3 in a laboratory because Cubiq wants to produce fats in an animal format, with the right ratio of fatty acids by triglycerides and phospholipids.

“If we produce just fatty acids and then reassemble triglycerides by enzymatic steps, we will produce non-natural fats that probably can be less efficient to become active in the body. Duck cells produce the fat in the proper format, and we don’t need to add steps in order to have the ingredient ready for food development.”

Montefeltro added: “[...] Animals are the perfect production machine for animal fats. Years of evolution bring this capacity. Replacing the animal synthetic pathways by a combination of microbial and chemical steps will be always less efficient for complex molecules. For example, bacteria cannot [make] fatty acids longer than C18. If you push that, by genetic engineering, to C22 and polyunsaturation, you will have a product, but the efficiency will be lower.”

Besides the sustainability argument, another benefit of producing DHA and EPA via cell culturing is the ability to tweak the nutritional format. Cubiq Foods is also working on a second product that uses genetic engineering to achieve even higher levels of DHA and EPA than conventionally sourced omega-3 fatty acids. 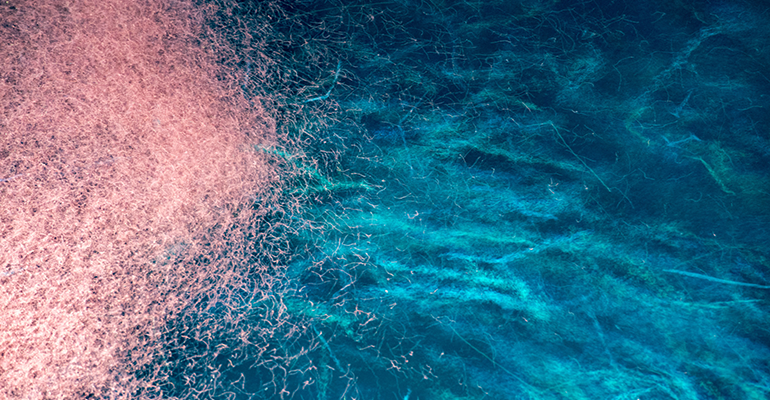 Fish and krill do not produce omega-3 themselves; it is present in plankton and builds up in their bodies through bioaccumulation. Using microalgae as a source of omega-3 oils is, in a way, going straight to the source.

The consumer-facing brand Örlo Nutrition, owned by Icelandic supplier Vaxa, uses photobioreactors and an artificial intelligence-powered platform to grow microalgae indoors. Its photosynthesis-based process is similar to growing algae in open ponds where they harness the light of the sun.

One advantage of producing microalgae indoors, however, rather than in the sea or open ponds, is the absence of environmental pollutants like mercury, polychlorinated biphenyls (PCBs), or pesticides, it says. Vaxa feeds the microalgae nutrients such as phosphorous, nitrogen, and carbon dioxide as inputs, which also contributes to lowering the carbon footprint of its manufacturing process.

“As our oceans change, as they become just a little bit warmer and more acidic, the algae species that are actually flourishing in our oceans shift, which has impacted even the levels of EPA and DHA that are found in fish oil,” said Corrina Bellizzi, head of sales and marketing at Örlo Nutrition in a recent podcast.

“This reveals [...] why it’s so important that we find better and more consistent sources that don’t necessarily have to impact our ocean eco-systems. That’s where, I think, we are headed in this space of omega-3s: new nutrition solutions that go directly to the source, to algae.”

Spotlight on sustainability in supplements and beyond
Nov 10, 2022