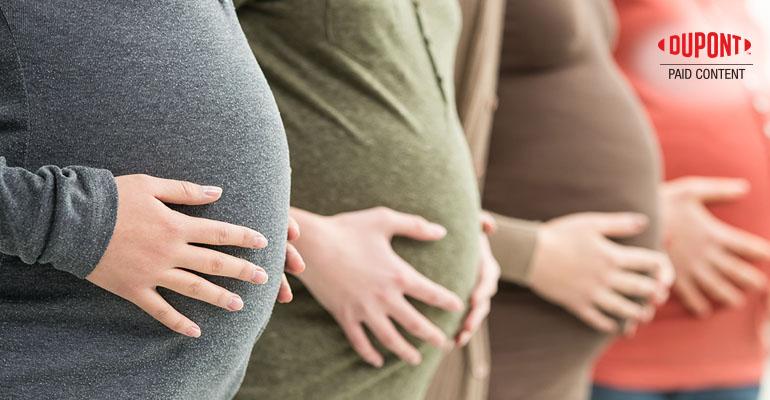 It goes without saying that during pregnancy, a woman’s body experiences a lot of changes. From her expanding belly to her fluctuating hormones; pregnancy is a physical and emotional feat. Some changes that happen, though, may not be beneficial to a woman and her developing baby. These changes include increased susceptibility to vaginal complaints such as bacterial vaginosis and vulvovaginal candidiasis or increased susceptibility to depression and anxiety, especially in the postnatal period. Treatment of these ailments can prove difficult mainly because women tend to avoid medication during pregnancy and breastfeeding, especially if they believe it may pose any risk to their child. Therefore, a natural and safe alternative such as probiotic supplementation can prove to be an attractive option. To understand how pregnant women can use probiotics to support their health we must first understand the role bacteria plays in pregnancy.

Related: Early life-stage nutrition and the development of the microbiome—podcast

It is not a surprise that the health and well-being of an expectant mother has a critical impact on the development of her unborn child. It is not as well known, however, that the microbial composition of the mother also has a profound impact on the health of her baby. There is a growing body of evidence suggesting microbial disruption during this period is linked to a host of unwanted ailments including the development of allergies and eczema in infants. We know that colonization of the digestive tract of the infant begins at birth, but what is being understood more and more is the role these microbes play in the development of the baby.  So, what does this mean for expectant mothers who are looking to be proactive about their health? The answer lies within the bacteria themselves.

Probiotic strains follow a similar taxonomy to dogs (genus, species, strain). This may be an odd comparison, but in the same way a Chihuahua and Siberian Husky have entirely different strengths and attributes, probiotics also differ from strain to strain. That’s why it is important to identify the right strain for the right job, otherwise you may end up with a team of Chihuahuas pulling you through the Alaskan wilderness. With this thought in mind, there are some strains of probiotics that support the needs of an expectant mother better than others. Two such strains are Lactobacillus rhamnosus HN001 and Lactobacillus acidophilus La-14 ®, whose benefits we will discuss below.

A healthy human vagina is colonized predominately by Lactobacillus and any reduction in the proportion of lactobacilli puts women at risk for infection. The most common vaginal infections in women are bacterial vaginosis (BV) and vulvovaginal candidiasis (VVC) – commonly known as a yeast infection. Both are characterized by inflammation and an imbalance of vaginal microbiota, and both have uncomfortable symptoms such as itching and discharge. Typically, between 10 and 30 percent of women experience BV during pregnancy and three out of four women will experience VVC in their lifetimes – with pregnant women being affected more frequently. The reason these ailments are so common during pregnancy? The thought is that increased levels of estrogen and glycogen (a polysaccharide of glucose that is an energy source for fungi and bacteria) put pregnant women at a higher risk of infection. Studies have shown that one way women can help support healthy vaginal microbiota and promote microbial balance is through probiotic supplementation. As previously discussed, not all probiotic strains are the same. Which is why these studies focused on Lactobacillus rhamnosus HN001 and Lactobacillus acidophilus La-14. It was shown that these strains had beneficial effects regarding both BV and VVC, in addition to supporting healthy microbial composition in the vagina. This is important because it shows probiotic supplementation may represent a safe and effective way to help support vaginal health, which in turn can help with recurrent BV and VVC during pregnancy.

After giving birth, a woman’s body goes through a whole host of physical and emotional challenges. Hormone fluctuation, sleep deprivation, feelings of being overwhelmed and more can cause a period of sadness which can last a few days to a few weeks, commonly known as the ‘baby blues.’ If these feelings are more intense and last longer, a new mother may be experiencing a more serious issue; postpartum depression (PPD). Between 10 and 15 percent of all women in the western world suffer from PPD, which can interfere with a mother’s ability to care for herself and her new infant. Therefore, PPD was studied in a large scale clinical trial of pregnant women. The study found that women who received probiotic treatment of Lactobacillus rhamnosus HN001 reported significantly lower depression and anxiety scores than those in the placebo group. Probiotic supplements will never be a replacement for postpartum care and medication prescribed by doctors, but it could represent a supplemental treatment to support the well-being of new mothers.

Motherhood is not easy. It is a delicate balance of learning how to care for a brand new baby as well as yourself. While probiotic supplementation is not a cure-all for all the physical and emotional tolls a woman goes through on her journey to motherhood and the period thereafter, it does represent one effective tool in her toolbox. DuPont Nutrition & Biosciences is proud to continue to research and provide effective strains that support the health of women. To learn more about our research and our mission, visit DuPont Nutrition & Biosciences.