HomeIngredientsIngredient replacements in the alternatives category
Recent
Ingredients
Happening Now
Addressing mental wellness and the long effects of COVID
May 17, 2022
Nourish the skin for longer-lasting youth
May 17, 2022
Vitafoods Europe 2022: Top Takeaways - video
May 16, 2022
Variety of protein sources may lower hypertension risk
May 16, 2022
Recent
Feeding a growing global population with alternative proteins
May 13, 2022
Alternative proteins market growth and opportunities — podcast
May 12, 2022
Good mood food: Which ingredients are best for improving mood?
May 12, 2022
Personalised nutrition: The role of acquisition for business growth — podcast
May 11, 2022

Ingredient replacements in the alternatives category 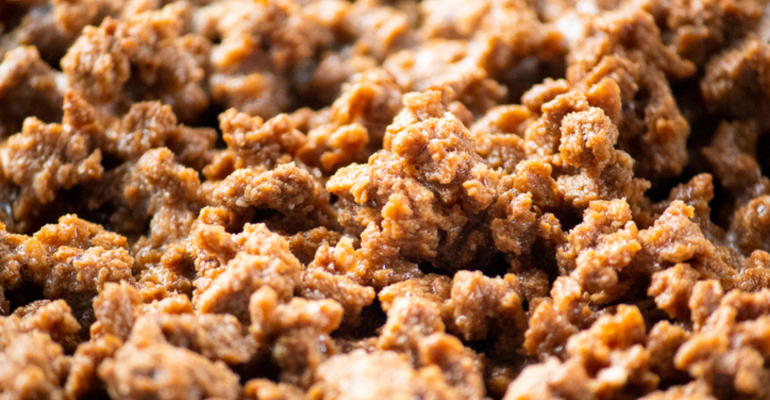 Exploring ingredients that offer functional and palatable benefits in the meat alternatives category.

According to a Nielsen report, 40% of Americans are shifting towards more plant-based foods which includes the different diets such as flexitarianism characterised as consumers occasionally consuming dairy, egg and meat, vegetarianism characterised as consumers excluding animal flesh food but consuming dairy and egg (Giract definition) and veganism characterised by consumers excluding animal and animal by-products from their diet. Over the last five years, sufficient funding and R&D innovation has been directed toward creating products with closer organoleptic properties to meat.

Texture, appearance, and flavour—these are the elements of meat that the plant-based meat alternative manufacturers are trying to capture, with varying degrees of success, using a range of ingredients to achieve these properties. There have been several products launched since 2014 and now manufacturers are on the road to have a clean label product. Most plant-based meat products contain methylcellulose, a chemically modified derivative of cellulose, which acts as a binder, providing adhesion to uncooked product, and when heated provides gelation that lends to a meat like texture with realistic firmness and springiness while retaining moisture and increasing the perception of juiciness. Consumers have been educated to avoid products with ingredients they cannot pronounce or which they do not use at home—methylcellulose falls into both these categories, which is why formulators are now looking for a solution that will provide the same functionality as methylcellulose, while offering a cleaner label.

There are two solutions: a fiber and a protein. The very first ingredient produced that claimed to replace methylcellulose was Fiberstar’s Citri-Fi. The citrus fiber made from the pulp, rag, core, and peel. Therefore, it is a blend of soluble and insoluble fiber and has water-holding, emulsification and gelling capabilities. When used in a plant-based meat, the citrus fiber can be used to bind oils and reduce saturated fats and improve juiciness resulting in a nutritional and sensory improvement. Saturated fats are reduced when the fiber is used together with liquid oils, which is stabilised and bound by the hydrophobic components of this natural fiber to solidify the oil, so they function more like solid fats. Another need in plant-based foods is texture and bite properties that do not change over time nor with heating. Part of the reason methyl cellulose is needed in plant-based meats is to provide thermal gelling; however, with the citrus fiber, texture can be added that does not breakdown over time nor with heating. Ingredients that can be replaced include carrageenan, gellan gum, mono and diglycerides, and lecithin. Typical usage rates are low (<0.5%), so there is also a large cost savings opportunity. To further enhance bite and texture in plant-based meat, Fiberstar is expected to release a new product called Texturized Citri-Fi. This has a much larger particle size version versus standard Citri-Fi and the dosage suggested is between 0.5-2%. In spite of the functionality claimed, Texturised Citri-Fi is not a 1:1 replacement for methyl cellulose. It is typically used in conjunction with other natural ingredients such as agar, native starch, and psyllium. The second replacement for methylcellulose launched in early June 2021 is Merit Food’s Puratein G, a cruciferin rich non-GMO canola protein. The functional plant protein has thermally induced binding and gelation properties that when combined with cold binding agents such as hydrocolloids, proteins, and clean label fibers, result in plant-based meat alternatives that do not crumble when heated, providing the meat-like texture and appearance consumers crave, with the cleaner label they are demanding.

Plant based meats have also made great advances in replicating the red color associated with beef. In beef, that color comes from myoglobin, a compound that transmits oxygen from the bloodstream to muscle cells. Beyond Meat uses beet extracts to color its product, while Impossible Foods relies on an iron-containing compound called leghemoglobin, an oxygen transport molecule found in the roots of legumes, such as soy. Like myoglobin, it has a red colour and—according to Impossible—a meaty flavour. The company produces its leghemoglobin with the help of genetically modified yeast.

Back of the Yards Algae Sciences, a Chicago-based startup, has developed a unique seafood flavouring using its algal heme technology. The flavouring product is designed for plant-based fish, shrimp, and other seafood alternatives, enabling 'true seafood' taste and umami flavour to elevate the consumer experience. The flavouring, AHA502, is created using the company’s proprietary algal heme technology and addresses challenges that many plant-based brands face when it comes to replicating the taste and flavour depth of real seafood. The product is claimed to have no off-notes, no overpowering fishy odour and can close the flavour gap between plant and animal-based seafood and ultimately convince more consumers to choose the cruelty-free, sustainable option. Unlike Impossible Food’s soy-based heme, which recently won a legal battle against questions over its safety due to it containing GMOs, the company makes its algae heme using a natural extraction process that does not require fermentation or genetic engineering. Being spirulina-based also gives it a nutritional boost. Triton Algae Innovations have also created their own versions of heme. Triton uses a red strain of algae to make its heme and has debuted a vegan tuna analogue product for retail that is claimed to be superior to existing alternatives from a flavour, texture, and appearance standpoint.

These examples showcase the developments and innovations of the meat and fish analog. More research is still required to obtain a 1:1 ingredient replacement solution for methyl cellulose replacement as clean label or cleaner label is becoming increasingly of concern to consumers. The meat and fish analog market has come a long way since it gained popularity in the last five years. Products are more closely resembling their animal-based counterpart; however, a range of ingredients are required for this. Strong consumer trends are expected to shape the market in the coming years.

Gabriela Swamy is a researcher at GIRACT, a business research & consultancy organisation specialising in food ingredients, additives and related fine chemicals and technologies.