Hybrid meat: For the many or the few? 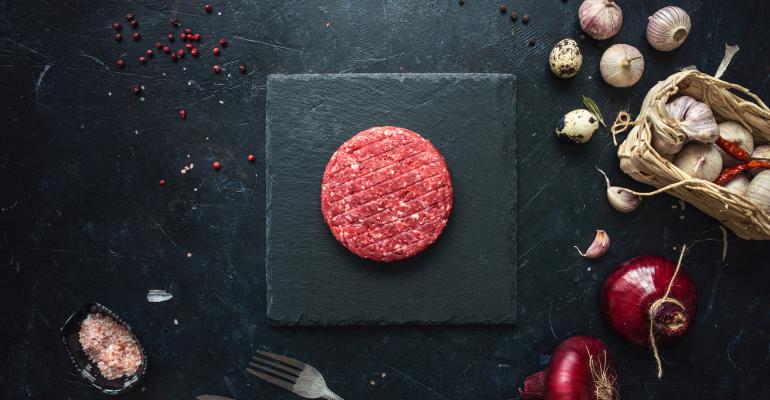 Hybrid meat products, containing a mix of animal and plant proteins, have gained the spotlight due to recent product launches by own and private-label brands alike. But are they the ‘best of both of both worlds’, or does this category please neither meat-eaters nor vegetarians in a mutually unsatisfying compromise?

Reduction of animal-meat intake is undeniably becoming one of the biggest trends in the health and nutrition sector. Whether for environmental, health or ethical reasons, many consumers are cutting down on the amount of meat they eat. The growth of the plant-based sector is one obvious example of this dietary transition; according to the Smart Protein Project’s report Plant-based foods in Europe: How big is the market?, between October 2019 and September 2020 sales of plant-based foods in Europe totalled €3.6 billion, compared to only €2.8 billion the year before.

However, a further and perhaps less prominent instance of product development motivated by meat reduction is the emerging category of hybrid meat products. Dr Simona Grasso, senior research fellow at the University of Reading, explains that hybrid or flexitarian products are those where “a part of the meat has been substituted with plant-based ingredients.” According to Dr Adrienne Rivlin, partner at LEK Consulting, “good examples are The Better Meat Co’s chicken nuggets which also includes cauliflower and chickpeas and Tyson Food’s ‘The Blend’ which is a beef and plant-based burger.” Rivlin adds, however, that “there is no industry (or consumer) consensus governing ratios of meat versus plants.”

The hybrid meat market is witnessing a plethora of new brands and products, despite being relatively new. “It’s an interesting space with new ranges launched regularly and high growth rates,” says Rivlin. “We expect to see some particular categories or specific brands start to gain real traction.”

Much of this interest in fact comes from traditional meat companies wanting to capitalise on the growth of the plant-based sector. Marija Banovic, associate professor at Aarhus University, gives the example of Danish Crown. This Denmark-based food producer deals primarily in meat processing of pork and beef, but in 2019 it launched a 50/50 concept by mixing vegetables into its meat mince. “Danish Crown will be launching more of the hybrid varieties,” predicts Banovic. “They do not want to lose the market share to plant-based companies, which have been exponentially increasing their share over recent years.”

Dr A. Elizabeth Sloan, President of Sloan Trends, shares that similarly “interest in the blend market is currently being driven by the major meat companies in the U.S”, adding that many of these businesses are using their less known-brands to seem like specific companies. For example, Hormel’s Well Carved line delivers ¼ cups of vegetables per serving, under the Applegate Farms’ name.

In the UK, however, many such products come from own-label supermarket offerings. “It is own brands from retailers into the UK that are currently selling hybrid meat products,” notes Grasso. Private brands, on the other hand, don’t always see the same level of success, perhaps indicating that the market is not quite ready for this concept.

What is the appeal of hybrid meat products as opposed to traditionally distinguished meat and plant-based, and what type of consumer is interested?

“Based on our recent studies in Denmark, Spain and the UK, we found that the main reason was taste, as plant-based products cannot compete on the same level with hybrid meat products,” explains Banovic. “This was followed by lower impact of these products upon the environment. Health had only a marginal positive effect. Nevertheless, in another study when communication around hybrid meats and 50/50 concept involved, intrinsic health motivation worked better than transcendent environmental.”

The consumer, therefore, tends to be one who would like to decrease their meat consumption, but does not want to compromise on the taste, nutrition, and sensory reward associated with traditional animal-meat. Often, this consumer falls under the ‘flexitarian’ label, described by Banovic as those “who already consume plant-based products, but would still like to moderately eat meat.” However, Sloan advises brands: “be cautious about positioning these products just for flexitarians; it will narrow the opportunity. In the U.S., in Dec. 2020, 36% of adults described themselves as flexitarian.”

Rivlin also points out that the consumer is prepared to pay a premium for these products: “as prices can be in excess of 100% of meat products, these consumers also tend to be ones that can afford higher prices.”

Accordingly, hybrid products are often marketed as healthier, more environmentally sustainable options to traditional 100% meat. According to Rivlin, these brands position themselves as allowing flexitarian consumers the opportunity to indulge in meat and potentially feel less guilty. “In marketing terms, there will also be a choice between private label and branded products,” observes Rivlin. “If the latter, critical factors are likely to be around driving trialability and observability – the successful brands will get both right.” By contrast, Grasso points to two different own-brand ranges that have been successful: the Waitrose range which markets itself for the upper middle-class market, and the range by Tesco which, according to Grasso, “is interesting because they promote it as a convenient product: you already have the carrots and onions mixed in with the meat so you save on buying other ingredients and prepping them.”

“These products are here to stay,” believes Banovic. “It cannot be that we have only black and white strategies toward plant-based diets in the future. They represent the middle ground, which is important, as we will need to provide more protein and nutrition to growing populations. We cannot achieve that solely by plant-based diets. We know that plant-based products do not contain proteins with the full amino acid profile as meat products do. Plant-based products incur higher processing to obtain the same protein composition as meat. What’s more, we know that nowadays Europe has the highest ever levels of meat per capita consumption, almost two times the world average. In addition, that meat and livestock production make up 45% of the European agricultural production value. Substituting up to 50% of meat with plant-based sources would still achieve substantial reduction in GHG emissions, water consumption, and land occupation. Having in mind that behavioural changes take time, these products should be here to stay. These products could be also a good strategy to use as a stepping-stone in the transition of predominant meat consumers to a meat-reduced diet, increasing consumers’ familiarity with meat substitution.”

Paloma Nosten, senior communications manager at ProVeg International, agrees with Banovic that plant-based and cultured products are not necessarily mutually exclusive categories but may form a highly promising complementary strategy. “Together, they have the potential to accelerate market entry by combining two different approaches to arrive at a perfect result, rather than perfecting just one approach completely,” Nosten says. “These products have the potential to be less resource-intensive and have a lower carbon footprint as well as to be safer and healthier than conventional animal-based products.”

Rivlin, however, suggests that hybrid products might not be a sustainable – in both an environmental and economic sense of the word – response to the growing demand for reduced meat intake. In fact, says Rivlin, “hybrid products may well be a gateway to a fully plant-based diet for some consumers, particularly for those with animal welfare or environmental / sustainability concerns.”

Indeed, as a half-way point between all-meat products and plant-based offerings, hybrid protein options face competition from both meat and vegan brands. According to Banovic, the latter particularly has “an aura of healthiness and environmental-friendliness, while hybrid meat products, even though they contain plant-based ingredients, still have meat and thus suffer from lower perceived sustainability levels.”

There seems to be no stopping the growth of the plant-based sector; in September 2020, Tesco — the UK’s largest supermarket chain — announced plans to increase sales of plant-based meat products 300 percent by 2025, while two months later, Unilever — one of the largest food and beverage manufacturers — set a new annual global sales target of $1.2 billion from plant-based meat and dairy within the next five to seven years. This exponential growth of the plant-based space may threaten the relevance of hybrid products. Many consumers who define themselves as flexitarian do not necessarily need exclusively flexitarian or hybrid products; indeed, the demand for plant-based options is largely driven by flexitarian consumers. According to the Smart Protein Project’s report Plant-based foods in Europe, customers who buy Beyond Meat Burger, arguably the most successful brand on the market today, are 70% flexitarians – far more so than vegetarians or even vegans. Perhaps it is unsurprising that many hybrid ranges – Tyson Food’s ‘The Blend’, Kerry’s ‘Crafty Carnivore’ and Brewdog’s 50% plant-based ‘Beyond Meat’ burger among them – have been discontinued.

As plant-based continues to grow, and hybrid meat products fight to maintain their relevance, it remains to be seen whether hybrid protein options are ‘the best of both worlds’ or a temporary solution as many consumers transition to a vegan or vegetarian diet. More certain is the growth of innovation in the alternative protein space at large; Grasso draws attention to US-based innovation in the hybrid dairy market, believing that “it’s only a matter of time before more hybrid foods are developed.” And according to Rivlin, “the category has applications even beyond traditional food products, particularly for consumers who are more motivated by animal welfare concerns.”