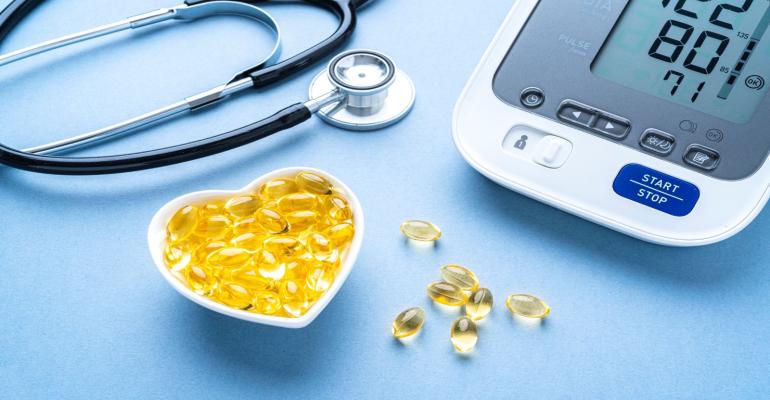 While research has indicated the consumption of long-chain omega-3 fatty acids could support healthy blood pressure, the necessary intake levels have been unclear. A new analysis published in the Journal of the American Heart Association (DOI:10.1161/JAHA.121.025071) suggests approximately 3g/d—in food or supplement form—is optimal to help lower blood pressure.

Researchers from Canada and Macau reviewed randomized, controlled trials published before 7 May 2021 that involved participants aged over 18 years and looked at an association between omega-3 fatty acids (docosahexaenoic acid [DHA], eicosapentaenoic acid [EPA], or both) and blood pressure. A total of 71 trials were included involving 4,973 individuals with a combined DHA+EPA dose of 2.8g/d (interquartile range, 1.3g/d to 3.6g/d), ranging for an average of 10 weeks. Optimal intake in both systolic BP and diastolic BP reductions (mm Hg) were obtained by moderate doses between 2g/d (systolic BP, -2.61, diastolic BP, -1.64) and 3g/d (systolic BP, -2.61, diastolic BP, -1.80). Subgroup studies showed stronger and approximately linear dose-response relations among hypertensive, hyperlipidemic, and older populations.

In a statement, Dr Xinzhi Li, study author and assistant professor and program director of the Macau University of Science and Technology School of Pharmacy in China, commented: "According to our research, the average adult may have a modest blood pressure reduction from consuming about 3 grams a day of these fatty acids. … Most of the studies reported on fish oil supplements rather than on EPA and DHA omega-3s consumed in food, which suggests supplements may be an alternative for those who cannot eat fatty fish such as salmon regularly. Algae supplements with EPA and DHA fatty acids are also an option for people who do not consume fish or other animal products."

Commercially, the study supports further development of food supplements that deliver a measured, efficacious dose. Harry Rice, PhD, vice president of scientific and regulatory affairs with GOED Omega-3, the international association representing the omega-3 industry, commented: “GOED welcomes the current findings as they corroborate and extend the results from the 2014 meta-analysis we commissioned to support the 2019 qualified health claims for EPA and DHA omega-3 consumption and the risk of hypertension and coronary heart disease. It's worth noting that EPA/DHA interventions in the majority of the included studies were via supplementation. While no one can dispute the benefits of fish intake, the reality is that most people can't achieve a high enough omega-3 intake with food alone. If you want to reap the blood pressure lowering benefits of omega-3s, most people are going to need to take a high-quality omega-3 supplement.”