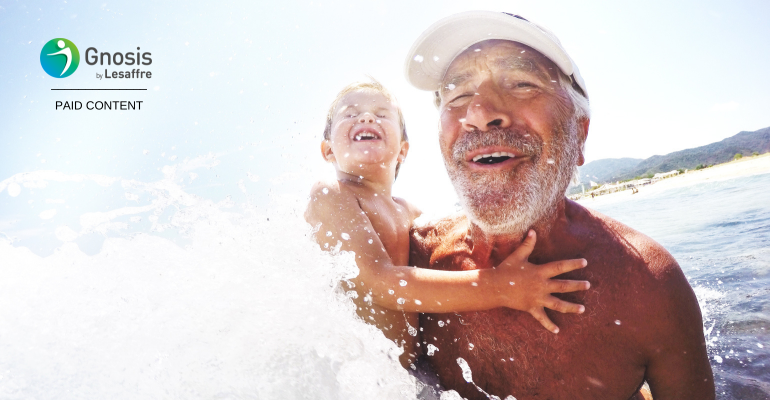 "Healthy ageing" is about optimizing opportunities for health to enjoy the longest, best possible quality of life. Two of the major health issues impacting healthy ageing are compromised bone and cardiovascular health—two areas where MenaQ7® is the only vitamin K2 as MK-7 clinically validated to address.

The clinical validation of MenaQ7® has paved the way for vitamin K2 as MK-7 to emerge as a vitamin that contributes significantly to whole-body health, promoting the increased ability to build strong bones during childhood, and maintain it as we age. Further, evidence is mounting that clearly links a lack of adequate K2 to higher risks of age-related degradation of the skeleton and cardiovascular system.

Why vitamin K2 is required through all stages in life

Vitamin K2's importance lies at the root of basic human development. Where bone health is concerned, the entire skeleton is replaced every seven years, a process regulated by osteoblasts and osteoclasts. The same cells are affected by MK-7: osteoblasts produce osteocalcin, the same vitamin K-dependent protein that binds calcium to the bone matrix.

With this understanding, let us work backward:

Once we achieve peak bone mass, that is all we have, and it will inevitably decline—that is unless we actively obtain proper nutrition. Just a 10 percent increase in bone mass is estimated to reduce the risk of osteoporotic fracture in adult life by 50 percent.[2] And the only K2 as MK-7 shown to improve bone mineral mass and bone mineral density was MenaQ7®.[3]

These statistics highlight the importance of building a foundation for bone health as early as possible, but the gravity intensifies when considering children and adolescents.

Vitamin K2 plays a vital role in children's health, including support for coagulation, promoting cardiovascular health (through the inhibition of vascular calcification), and bone mineralization. Unfortunately, research shows a high prevalence of K deficiency among infants and children; in fact, research shows that as many as 50% of all newborns are vitamin K deficient.

And as recently as 2017, a study cited a "disturbing growth" in the number of low-energy fractures in healthy children and adolescents. The researchers noted multiple risk factors might contribute to this growing health concern. They stated: "among the leading consideration are deficient or insufficient nutrition and nutrients, including calcium, vitamin D and vitamin K … the particular role of vitamin K2, especially menaquinone-7 (MK-7), has been highlighted in the literature and distinguished from vitamin K1 in maintaining calcium homeostasis and healthy skeletal system." The conclusion was that vitamin K2 as MK-7—used with vitamin D3—should be considered a healthy option to help curb those numbers.[6]

There is a reason vitamins K2 and D3 are being highlighted so clearly in more research. Few work better together, particularly where bone health is concerned.

Both vitamins D and K are fat-soluble vitamins that play a central role in how the body utilizes calcium. Vitamin D promotes the production of vitamin K-dependent protein osteocalcin, which is responsible for building bone. Yet, when combined with vitamin K2, osteocalcin levels are significantly increased.[7] Further, vitamin D supports calcium absorption from the diet. Still, it needs help from vitamin K2 to make the bone-building protein osteocalcin active in the body, enabling calcium to bind to the bone matrix, leading to stronger bones.

The combination of MenaQ7® vitamin K2 and D3 is clinically proven to have a beneficial effect on children's bone health, and MenaQ7® is the only vitamin K2 as MK-7 proven to deliver on the promise of strong bone health in children and adults.[3]