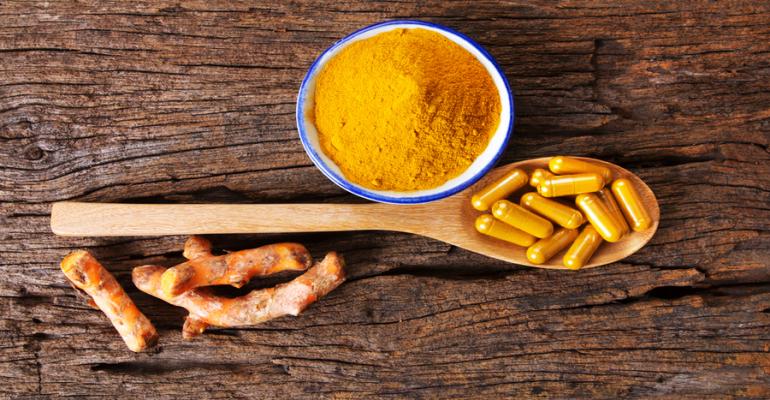 Curcumin modulates important molecular targets which participate in the regulation of bone remodelling1. In particular, by interfering with the nuclear factor kappa light chain enhancer of activated B cells (NF-kB), curcumin inhibits osteoclastic bone reabsorption and its anti-oxidant properties suppress osteoclast differentiation in in vitro experiments. In several animal models of postmenopausal osteoporosis (in ovariectomised (OVX) female rats), a significant improvement in the size of the femur was observed after oral administration of curcumin. However, in spite of the enormous potential supported mainly by in vitro and in vivo experimental models, the clinical application of curcumin for bone health has been hampered by poor absorption and weak bioavailability of curcumin administered orally.

Meriva®, the lecithin-formulated highly standardised turmeric extract, facilitated the translation of the promising health benefits of curcumin in several disorders, includingjoint health, eye and skin disorders, diabetes, fatty liver disorders, and BPH discomfort. It may also help with neuropathies and sports medicine. The 26 clinical studies available for this ingredient have allowed Meriva to become a market reference in the curcuminoids nutritional space, both in terms of scientific validation and commercial success.

In the clinical study presented at Vitafoods Europe 20172, the administration of Meriva (1g/day), for six months in asymptomatic, otherwise healthy subjects (median age of 57 years) with a DEXA T-score between -1 and -2.5 (early osteopenia with an increased risk of future osteoporosis) resulted in the progressive improvement of bone density (p>0.05 after 12 and 24 weeks) as measured with standard DEXA and heel densitometer.

This new clinical data consolidates Meriva’s biomedical substantiations, with particular attention on  healthy ageing in women. According to Harward Medical School, fracture risk increases as bone mineral density declines. A study published in the Journal of the American Medical Association in 2001 reported that a 50 year old white woman with a T-score of -1 has a 16 percent chance of fracturing a hip, a 27 percent chance with a -2 score, and a 33 percent chance with a -2.5 score. Meriva offers well tolerated, more bioavailable curcumin as a new weapon against bone loss in its early stage.

Antonella Riva has been Head of Preclinical and Clinical Development at Indena SpA since 2003. She is a Senior Research Scientist involved in the biological  and clinical characterisations of botanicals in cardiovascular disorders, gut disorders, sport health and in the oncological field. She has published more than 100 research articles on medical and biological topics particularly  health food ingredients. She received her master’s degree with honours in Biological Science from the University of Milano.