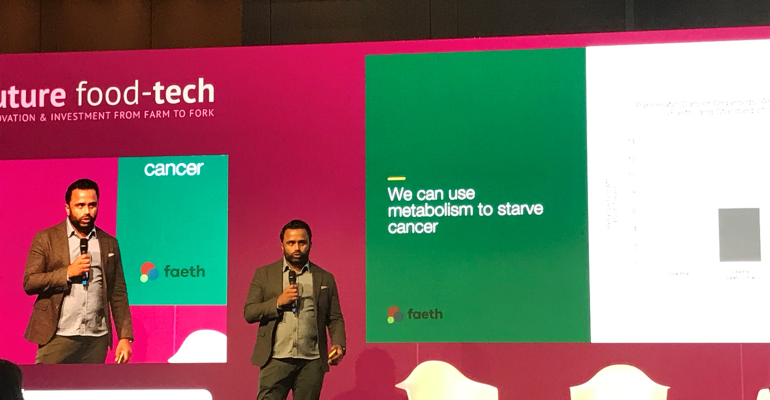 Food is fuel for the body, but it also feeds cancer. One precision nutrition startup is using amino acid-adjusted meal plans (combined with drugs) to starve tumours of the nutrients they need and stop cancer growth.

Faeth Therapeutics’ CEO and co-founder, Anand Parikh, describes himself as a drug developer who puts food first. He previously worked at Virta Health, a US personalised nutrition company that uses ketogenic diet plans to treat and reverse type 2 diabetes.

"In my mind, having seen this across other diseases such as type 2 diabetes, it is not a question of if but when precision nutrition revolutionises cancer and many other diseases as well," Parikh told attendees at Future Food-Tech in London.

“[They] all came to the same conclusion: that precision nutrition is a fourth pillar in cancer care, alongside surgery, radiotherapy, and traditional drugs,” Parikh said.

The main nutrients that Faeth Therapeutics is trying to deplete (because of their importance for cancer growth) are three non-essential amino acids: serine, glycine, and proline.

Working with chefs and scientists, it has developed a meal plan with foods matched to specific cancer types and delivered directly to patients’ homes. One such meal is an amino acid-modulated dahl that can be microwaved in three minutes, served with a yoghurt sauce.

However, dietary changes alone are not sufficient to tackle cancer. Faeth Therapeutics’ solution is three-pronged, comprising of the meals, therapeutic drugs, and an app. The app, which gives users access to registered dietitians, is an important part of its solution to ensure compliance, Parikh said.

“At the end of the day, changing behavioural patterns, especially for people that are in as complex a mental state as cancer patients, is not easy. You need behavioural help; you need someone on your side,” said Parikh.

Its preclinical research in mouse models of intestinal adenoma and lymphoma has shown that a serine and glycine restricted diet can significantly improve survival. In one model, it doubled the 12-month survival rate from 25% to 50%.

Other preclinical research on pancreatic cancer models showed that, when combined with a Faeth diet designed to suppress insulin production, other cancer drug treatments were as much as 500% more effective and could even stop the growth of cancer cells.

The startup has ongoing trials in other cancers, including metastatic colorectal, metastatic endometrial, and ovarian. Human clinical trials are also underway.

Precision nutrition cuts the fuel to the tumour’s tank

"If you think about it, what we're saying makes sense,” said Parikh. “Metabolism writ large – this very complex [...] map of equations and pathways – can be boiled down to nutrients, channelled through activated metabolic pathways that generate outputs. A plus B equals C.

"But all of the focus in cancer - 99% of all funding - goes up top into mutated growth signalling. We develop inhibitors to stop mutations in cancer. But the mutation is just a signal; it's like putting your foot on the accelerator of the car. The actual heavy lifting of growth and proliferation is done by metabolism,” Parikh said. “What we do [at Faeth Therapeutics] is we cut the petrol to the tank. [We] cut the nutrients that these tumours have a reliance upon.”

As for its go-to-market strategy, the US-based startup, which has raised a total of $67 million in funding so far, plans to get regulatory approval from the US Food and Drug Administration (FDA) for its therapeutic drugs, and then provide the food and software to patients for free.

Powered by a machine learning platform

Ultimately, the startup aims to identify a tailor-made treatment plan for every patient, in every cancer, across every genotype, and in every line of therapy. Doing this is “a data problem that can only be resolved using machine learning,” Parikh said.

Its custom-built machine learning platform, called MetabOS, inputs information on the RNA sequencing data of a tumour, the organ in question, the tumour’s genome type, and the anti-cancer agent that is being used. It then predicts nutrient vulnerabilities.

This machine learning platform can be used for any cancer type and will form the basis of all its upcoming trials, Parikh said. However, he added that Faeth Therapeutics would need to raise not $70 million in funding but $700 million to do these trials.

Parikh describes its trio of products as "complex and expensive" but effective in beating some of the hardest to treat cancers, including pancreatic.

Could restrictive diets also deplete the microbiome – and immunity?

But, just as early cancer treatments damaged healthy cells as well as cancerous ones, could a restricted diet, such as the one proposed by Faeth Therapeutics, starve the gut microbiome of the nutrients it needs? A healthy gut microbiome is known to play an essential role in immunity and therefore in helping the body fight cancer; depleting it could therefore be counterproductive.

Parikh said Faeth Therapeutics’ specialised meals had a “pretty broad coverage” of the 280 or so nutrients that exist and they usually only had two or three nutrients removed. Nevertheless, Parikh said the startup would be interested in tracking potential impacts on gut diversity if other researchers took this on.

“[...] we feel confident that we know what's going to change [from a cancer metabolism perspective], and then we'll leave it up to experts in the microbiome to tell us what future impact [our treatment] might have.”

Current knowledge on the gut microbiome is still evolving, he said.

“In my mind, it's like we are waiting for the microbiome to be characterised in as much detail as human metabolism writ large. As the microbiome catches up – and hopefully through the use of data science tools it won't take 100 years to get there, it'll take 10 or 15 – we'll be able to look at those impacts more closely.”

Read more about the research on how diet can impact cancer tumour growth: