The answer to healthy aging lies within the gut 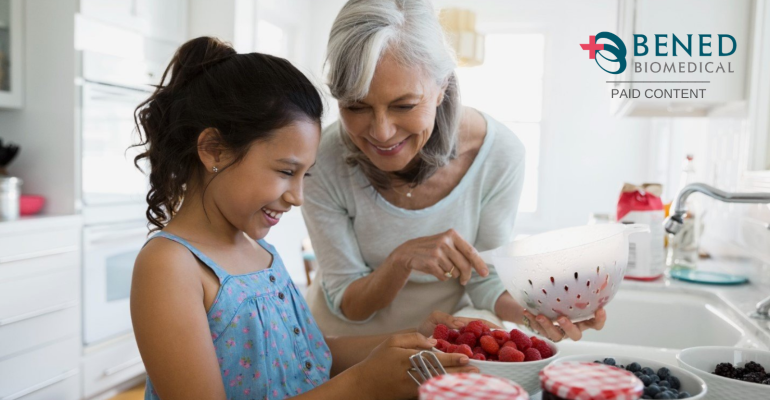 A recent survey1 found 87% of Americans fear some part of getting older. But while ageing can seem scary, it doesn’t have to be a negative experience. There are ways to retain health and vigor throughout the ageing process.

With appropriate sleep, diet, and exercise, getting older can be quite enjoyable. Keeping these three in balance, though, is not always easy. Thankfully, there are other ways to boost healthy ageing, one of them being via the gut specifically via probiotics.

When ingested, probiotics pass along the gastrointestinal (GI) tract into the large intestine, where they often are most active. From here, these microbes activate cells inside the gut, causing them to release a broad range of molecules. Just as we communicate with others through different means – the internet, cell phones, physical mail – these various molecules each function as a specific message or set of instructions for other cells and tissues throughout the body. In this way, probiotics (and everything else ingested) regulate various body systems and substantially influence overall health.

One of the most fascinating ways probiotics help human health is by impacting the nervous system, through something called the gut-brain axis. Most scientific evidence for the gut-brain axis has been discovered only within the past decade. Just a few papers on the topic in the early 2010s has ballooned into nearly 800 published in 2021 alone2

As the gut-brain axis is further studied, it becomes apparent that it can affect any health aspect in which the brain is involved: mood, sleep, cognition, memory, neurodevelopment, neuromotor function, etc.

VigorBiotics, which come from probiotic strain L. paracasei PS23, are unique in causing the gut to send messages that can benefit the nervous system–and even slow down the natural ageing process. Studies giving VigorBiotics to mice showed benefits to aging-related cognitive decline. The mice experienced increased brain-derived neurotrophic factor3 (BDNF, a chemical critical for nerve development and repair) and regulated levels of neurotransmitters4 (needed for effective brain cell communication).

Another common detriment of ageing with which VigorBiotics can help is muscle decline. When aged mice were given VigorBiotics, their mitochondrial function5 (necessary for preventing muscle atrophy) and muscle mass6 were preserved.

Human trials are underway to verify these benefits. A soon-to-be-published randomized control trial showed significantly lower anxiety and stress hormone levels, as well as increased positive emotions, in people taking VigorBiotics, compared with a placebo. Clinical studies have been initiated that will further explore VigorBiotics’ age-related brain and muscle benefits in people.

Remember how probiotics must first pass through the stomach before reaching the gut? Well, this path isn’t so friendly to them.

Aside from digesting food, the gastrointestinal (GI) tract is also a major immune organ, designed to protect the body from anything foreign. The stomach’s harsh acidity takes care of most cells, including probiotic bacteria. Many of them never make it through, cutting short their potential.

VigorBiotics are different. When probiotic strain PS23 cells are at the strongest point of their life cycle, they undergo heat treatment to become “postbiotics,” non-viable microorganisms that possess health benefits.

The effectiveness of these PS23 postbiotics is quite comparable to that of the live strain. And in some ways, VigorBiotics are even more advantageous.

First, survival inside the stomach is not an issue. Their potency is unaffected all the way to the gut. Secondly, they can be processed in ways that are impossible for probiotics, bringing function to all kinds of food and beverages. Finally, storage is not problematic as it often is with live strains. VigorBiotics do not need to be kept cool, nor will they lose effectiveness over time.