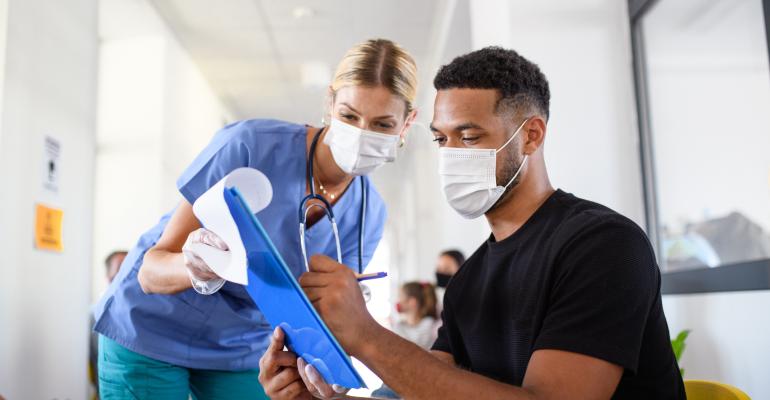 The COVID-19 pandemic, the killing of George Floyd, and the increased visibility of the Black Lives Matter movement last year sparked conversations about the importance of diversity in clinical trials. Heightened attention to the lack of diversity in clinical trials led to pressure on manufacturers and clinical research organisations (CROs) to see clinical trial diversity as an imperative rather than a convenient tick-box. Many called to reverse the historical underrepresentation of marginalised populations in trials to obtain data that reflects the diversity of real-world populations.

However, much of this discussion was confined to the pharmaceutical industry. While the U.S. FDA issued guidance on broadening eligibility criteria in clinical trials, this was focused on ‘clinical trials intended to support a new drug application’ and interpreted largely in relation to pharmaceutical trials.

DK: Traditionally, pharmaceutical clinical trials are thought of as being serious in nature and undertaken to help in the discovery of a new treatment for a disease. Nutritional studies have focused on things ranging from nutrient status to public health concerns. While all of us eat foods, not all of us need or take medications; however, for those who do, the idea of drug discovery and treatments that may be beneficial are enticing. The nutrition research front is growing to recognize that data needs to be from diverse groups in order to get a decent understanding of how the nutrition may be impacting physiology, biochemistry and quality of life.

JC: Nutrition and supplement sectors still have a relatively lower appetite and budget for clinical research. Hence nutra and food trials usually are much smaller in sample and rarely multi-regional. However, while clinical research budgets are going to remain comparatively limited in the food/supplement sector, with the growth of clinical trial providers in Asia and Eastern Europe over the last decades, trial costs and speeds will greatly benefit. Ingredients manufacturers can now consider carrying out more than one clinical trial as evidence of safety and efficacy before or even after launch. At least one of these trials may be placed in a region ethnically different from previous studies. Ethnic or racial diversity in nutra clinical studies is possible also within a single country like the United States with a sizeable and diverse population if the trial protocol consciously demands such volunteer recruitment upfront. Every country, however small, still offers some degree of ethnic diversity; Singapore, for example, has a good mix of Malay, Chinese and Indian gene pool.

VFI: Why has diversity in nutraceutical and food clinical trials traditionally been a challenge?

DK: I do think that diversity in subject recruitment has not been a general thought until recent years. In the nutrition research industry this mirrored the pharmaceutical world, who just realized a few years back that more studies in females and diverse racial and ethnic groups result in stronger data.

JC: Clinical research objectives and population selection in our industry are largely driven by private funding and may continue to do so. Hence choice of racial groups in trials may continue to be skewed heavily in favour of the white male if that is perceived to be largest consumer group. In the absence of specific mandates by policy-makers, regulators or trade bodies, the only hope to see diversity in study populations is to hope that public money is diverted more to the under-represented sections of our society like women of Black, Hispanic or Asian descent who may possibly respond differently to supplements.

VFI: How would you articulate the need for - and benefits of - diversity in nutraceutical and food clinical trials?

DK: Diversity is important because we are a diverse set of humans. Including diversity in research allows the researcher and the public to see data that is closer to the truth, because it is collected from a diverse set of participants.

JC: Not all, but the effect of some drug molecules and nutrients varies as per genotype (pharmacogenomics, nutrigenomics) but also environmental factors (epigenetics). If the trial sponsor has aspirations for global markets, then it is imperative to try the product not only on different racial populations but also different food habits and lifestyles. Product doses and safety profiles may also vary across races and gene-types.

VFI: What efforts are you and other CROs doing to ensure diversity in patient recruitment?

DK: We try as best possible within the confines of the study design to include a diverse set of participants. This may be by age, gender, ethnicity, location, and the like.

JC: Genetic diversity is not skin deep. Selection of trial participants merely on the basis of skin colour or self-reported racial origin does not normally ensure the correct genomic selection. Alleles of genes responsible drug/nutrient action and metabolism may occur randomly within and outside the same race. About 38 million single-nucleotide polymorphisms (SNPs) have been identified in the human genome but it is not possible to characterise all of them. Genomic databases are available for research use and it is indeed possible to carry out genomic screening for a small number of trial participants. Vedic Lifesciences is trying to power genomic profiling of participants, while also collaborating with sites in other countries for some of our studies.

VFI: How has technology and the digitisation of clinical trials been an opportunity to widen patient recruitment?

DK: From remote decentralized IRB approved trials, so data collection and expedient real-time analysis, technology has been a good thing for research. The challenge with technology, even within the United States, is that access to it is not even and equitable across the board. Research sponsors often help to overcome this barrier by supplying “smart technology” to those who may not have it. Technology may be one of the greatest drivers for more diversity and inclusivity in research.

VFI: How can the nutraceutical industry do better in representing a wider demographic group when developing, testing and marketing their products?

DK: Allow those with whom you are executing clinical trial agreements to have a greater say in the study population, target recruitment and so forth. Remind companies and sponsors that all consumers are their intended audience and not just a sliver of society. This is an area that needs more discussion and is also an opportunity for growth.

JC: Supplement companies are doing a great disservice to themselves and to their customers if they refuse to look outside of their home countries to sponsor human studies. Companies will gain not only racial diversity but also speed and affordability if they consider studies in racial diverse countries like India and Malaysia. These countries have clinical investigators and allied medical staff, many of who are trained in the US and Europe, and state-of-the-art medical equipment to power high quality clinical studies which are more likely to be accepted to a global audience.

Diversity and inclusion opportunities across the industry—podcast
May 13, 2020