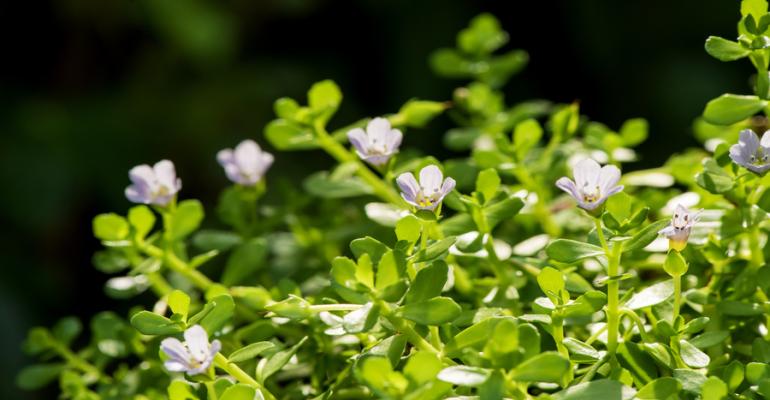 Studies on the mechanisms of <i>Bacopa Monnieri</i> have provided insights to its physiological effects on enzymes and receptors involved in the cognition process.

Bacopa monnieri (L.) Wettst., (family: Plantaginaceae), commonly known as brahmi, is regarded as an important herb in Ayurveda and appears to help improve intelligence and memory, and revitalise the sensory organs. The nootropic activity of the plant has been examined by several researchers and alcoholic/hydroalcoholic extracts have been shown to enhance memory or other cognitive functions. Detailed studies were undertaken to examine the chemistry and physiological effects of brahmi to develop a botanical ingredient suitable for food supplements. The ingredient was developed with careful considerations to finer aspects of chemistry that included original work on correction of chemical structures reported in the scientific literature on bacoside A and B, studying geographical variations on the content of these constituents, developing specific harvesting practices and milder extraction processes to retain native chemistry of the plant. This botanical extract (as BacoMind®) was subjected to in vitro and in vivo studies followed by clinical trials to assess efficacy and safety.

BacoMind was evaluated in two randomised placebo-controlled studies involving elderly subjects to assess its effect on improving cognition. In the first study1, conducted in Australia, 81 healthy participants over 55 years of age (mean age: 65.4 years) received either 300 mg of the ingredient or a placebo daily for 12 weeks. The participants who took BacoMind showed significant improvement in verbal learning, memory acquisition and delayed recall measured by the Rey Auditory Verbal Learning Test (AVLT). The ingredient appeared to be effective in enhancing cognitive performance by improving both memory acquisition and retention in healthy elderly individuals. In the second study2, Indian elderly people between the ages of 50 and 75 years (mean age: 65 years) took 450 mg of BacoMind daily for 12 weeks. Neuropsychology tests revealed significantly improved performance in tests associated with attention and verbal memory, and the ingredient was found to be well-tolerated in elderly participants. These studies became part of meta-analysis of randomised controlled trials on the cognitive effects of the Bacopa monnieri extract3.

The short-term safety and tolerability of BacoMind was tested in a phase I human clinical study, with the support of clinical, haematological, biochemical and electrocardiographic parameters5. A sub-chronic oral toxicity study for 90 days in rats did not seem to reveal any evidence of toxicity with respect to clinical signs, neurological examination, food consumption, body weight gain, haematological and blood biochemistry parameters. A no-observed adverse effect level (NOAEL) of 500 mg/kg of body weight was established in rats6. BacoMind was also tested by standard genotoxicity tests as per OECD guidelines7.

The active constituents of B. monnieri are bacoside A and B. Phytochemical investigations8,9 conducted on BacoMind helped bring clarity to the constitution of bacoside A, the major bioactive saponin mixture of the plant. These studies also showed that identity of bacoside B is still not clear, therefore, claims on its presence in supplements should be avoided10.

Deepark Mundkinajeddu is head of research and development (R&D) at Natural Remedies Private Ltd. His major research interests include phytochemical characterisation, bioactivity profiling and the scientific substantiation of botanicals used in food supplements and traditional medicines. His other interests include intellectual property rights and global regulatory issues pertinent to botanicals. Mundkinajeddu’s team has contributed phytochemical reference standards from Indian medicinal plants to pharmacopoeia, research institutes and the herbal industry worldwide.